That the Raelians had discovered the ultimate of truths and in doing so we had escaped the Matrix. (In this context the Matrix represented the world we live in, where people are sleepwalking through life completely unaware of the truth of their existence)

Dressed in character we took to the streets with the purpose of finding others who might be ready to escape this 'Matrix.'

7 years later I have discovered that the Raelian Movement is not what we have been led to believe (after extensive investigation), that in fact it is the Raelians themselves who have fallen victim to a very clever illusion...

Are you sufficiently open minded to question your existing paradigms? Or are you a sleepwalker - someone who finds their sleep very comfortable?

If TRUTH matters, then read on to discover just how deep the rabbit hole goes...

In 1978, I read Claude Vorilhon’s book “The book which tells the truth”. I lived all alone with this “truth…” which hunted me every day until 1981, because there was in these revelations some points that touched me a lot. In April 1981, I finally meet for the first time the Raelians. I loved those people a lot, they were marvelous and they still are.

They convinced me to go to the awakening seminar in July of that same year. It is at this time that the adventure really began; I would rather say the misadventures which, with the 25 years that followed, would reveal to me the true personality of this being which pretend to be prophet, but is in every way the contrary of what a prophet should be.

My actual experiences near him will unveil to me, as you will see, an individual who lies, who lacks a lot of love and respect for others. He is jealous, possessive, selfish, condescending and vindictive at a highest level, moreover manipulator, cheap, profiteer and racist. Here we go, I am finally able to reveal the faults of this individual that pretends to be prophet. So many faults in only one man! His status of prophet gives him respectability that he doesn’t deserve. He has the right to be like this, but not when you are in a situation of power over so many people, because it creates so much suffering. Since we give him so much value, everything he does is respected and taken for cash and we let him hurt us without reacting, except to justify his unkindness and his incoherencies. In the following, I will explain few situations and revelations that I witnessed and which will show you all the ignoble sides of this man.

I've received a number of calls and emails from people wondering why I am no longer involved in the Raelian Movement. For the most part, I've stayed silent while I did my research. It took me many months before I finally decided to write these words. During those months, I spent time doing quite a bit of thinking and observing in addition to some extensive research. I would have greatly appreciated it if someone had shared this information with me years ago, so I feel that it is my responsibility to at least make this available for those who might be open-minded enough to consider my words and do their own research.

Some of you may already know that after serving for many years as a Guide, I formally resigned from the Raelian structure on November 9th, 2009. Then, on November 12th, just three days after my resignation, I was officially banned from all Raelian meetings, events, and seminars for seven years. I was never disrespectful toward anyone, and I have always lived very harmoniously according to the principles that are taught in the Messages, so being banned came as quite a surprise to me!

I could go into more detail about exactly what happened, but I'll save that for the end in case anyone might still be interested. Personal stories can be important, but I believe that objective factual information should always be the top priority of anyone seeking the truth, especially in cases like this. The bottom line is simple: After 17 years of being very active in the Raelian Movement, I discovered factual information that made me ask questions which no Raelian Bishop or Guide was ever able to answer in a logical manner. The first and most important part of the information was found in the books of Jean Sendy.

Many people have commented that they read some of Sendy's work and didn't understand my concerns. I want to make it clear that Sendy was a brilliant writer whose books are not easy to read. I found many points in his writings that felt very familiar to me because I had read the exact same points in Rael's books for years. I was even more surprised to learn that Jean Sendy gave a public lecture in Clermont-Ferrand (France) in March 1974. Then, later that year, Rael published his first book, The Book Which Tells The Truth.

Rael always taught us to stand for truth, so I am now sharing this information in the light of Truth, Love, and Understanding. I am not accusing anyone of anything, but I am seeking a better understanding. So, if anyone can share a good explanation, I would be very happy! Thus far, the only explanations I have heard from high-ranking Raelians are based purely on belief and not on understanding. This is the opposite of all the teachings of Rael and the Messages. The Raelian teachings have always said that we should never believe or accept anything that doesn't make sense to us, no matter who says it, even if Rael says it himself. Rael has told us for years that we must always use our own consciousness and think for ourselves as individuals. If we are to truly think for ourselves, we should consider all the facts before coming to any conclusions. So, my intent here is simply to share the following information for those who might be interested.

Read more »
Posted by Advocatus Diaboli at 9:34 AM 1 comment:

Raelism vs. Science: THE CLONE DILEMMA

According to Rael's e-book, Intelligent Design , an advanced race of extraterrestrial beings called the Elohim are able to achieve et... 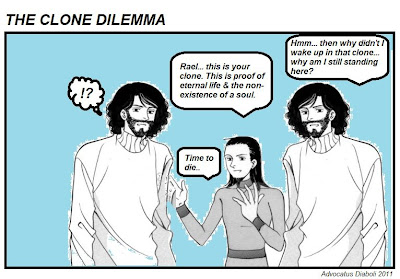 Advocatus Diaboli
Ex-Raelian Guide (level 4) - IRM member (1991~2003) -------------------------------------- FAIR USE NOTICE This blog may contain copyrighted material. The use may not always been specifically authorized by the copyright owner. Such material is made available in the efforts to advance understanding of religious, cult, secret society / fraternity, human rights, environmental, political, economic, democracy, scientific, social justice issues and inter-related subjects. We believe this constitutes a 'fair use' of any such copyrighted material as provided for in section 107 of the US Copyright Law. In accordance with Title 17 U.S.C. Section 107, the material on this site is distributed without profit for research and educational purposes. Information, including photos have been submitted by various people for public research and educational purposes. In some cases, people have forwarded information and photos that had been stored on their computer hard-drives for years and the original source could not always be determined.

This work is licensed under a Creative Commons Attribution-NonCommercial-ShareAlike 4.0 International License.